A Dream Of Spring

From you have I been absent in the spring,
When proud-pied April, dressed in all his trim,
Hath put a spirit of youth in everything,
That heavy Saturn laughed and leaped with him.

As the “Bard” William Shakespeare would say, now that we are entering the spring, and the first flowers are ready to be seen, so do our pixels become more green. More and more lands change their camps to fit their spring time.
I promised you an interview the last time and here it is, from one of the ZCS creators, Slightly Opaque aka Pluto Is A Planet. Because I know Pluto is a busy person, I did not want to bother him with my zillion questions and endless curiosity therefore I asked him only some basic stuff, and he was kind and willing to reply:

The Sphinx: What made you inspire the creation of the meter?
Pluto: It was originally created as an urban combat system for a sim me and my friend were planning, many sim owners and friends asked if it could be converted into a meter that could be used in Gor and a few months later that we had our first beta. There's some remnants of that urban meter code still in there, but it's mostly been rewritten.

The Sphinx: What is the greatest challenge in maintaining the meter?
Pluto: Keeping a list of current issues and what needs to be fixed is something that's quite challenging.

The Sphinx : What are the main differences with GM Meter?
Pluto: You would have to ask other people, I don't use it and I don't know anyone that does anymore, besides it's not something I can really comment on without being biased.

The Sphinx: How secure is ZCS meter against hacking or game exploiting?
Pluto: It was designed to be secure from the beginning, other than an issue where some players decided to spam their meter to slow it down, there's been no security issues. It's really not that hard to make something secure, unfortunately the major causes of cheating come from problems Second Life has and are far more difficult to solve.

The Sphinx: Are there any future developments to the meter in the pipeline?
Pluto: There's about half a dozen large things in the pipeline, some are mostly done and just require additional polish to come out and some are still in the planning stage.

From all his replies his last one intrigued me the most. I wondered how useful are the features that ZCS brought back for example the economy, so I decided to research a bit more, comparing some meter rules among the top 20 busiest GE sims. 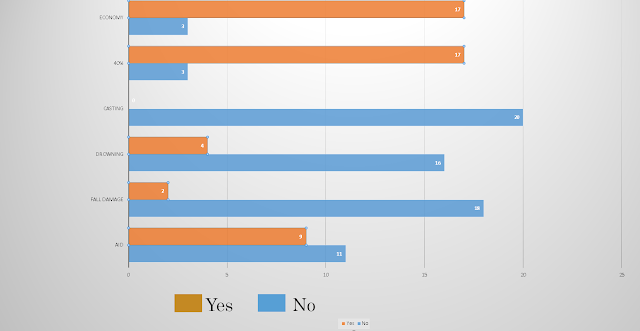 As you can notice from the chart above, seventeen out of twenty sims have the economy enabled.
Players want to steal coins, owners want to have the bank in their sim, and everyone wants to buy free stuff and weapons using the meter coins, provided that there is stuff to buy available of course. The problem is that there are very few products you can buy with ZCS coins. Very few weapons and some role-play items, and even those have emerged only recently.
Other statistics are also interesting. Almost half the sims use aid, while casting, which is a feature in the meter that makes bandaging and binding longer (but more realistic), is used no-where. Of course there are other smaller Gorean full sims and homesteads which use different settings.
At some point I plan to do a more comprehensive comparison regarding sim rules.

As always, in the past weeks we had some movements between the busiest Gorean camps.

Lots of players have “immigrated“ from the Lands of Ghosts to DSO. I really hope that Ghost Stronghold does not become Ghostly again”.

A big tsunami hit and swept some Panther tribes In Elation I heard. Where did those huntresses flee to? A merchant told me that they moved to a secluded island this time called “River Forge”.

It is not secret that the once proud village of Enigma vanished in the darkness. The villagers took their boats and moved to the well-known grounds of Tazberg. I haven’t heard those Taz words for a long time to be honest. Initially the choice struck me as strange. Tazberg has always been a group which was focusing on the American time-zone, while the residents of Enigma were mostly active during GMT hours. Oh well, every every obstacle is an opportunity they say, don’t they? Perhaps Tazberg will become one of the few places that are busy day and night.

With an aura of Mystery

For the last I have left the best. The new Citadel in Kalana woods is finally ready. I took my swag and decided to take a peek. And oh my, what a peek was that! It seems someone worked really hard this time.

As we reach the docks we face a big Poseidon statue and the outer city walls. The sim is a mixture of Roman-Carthage style, which makes the whole city emit a tone of mystery. 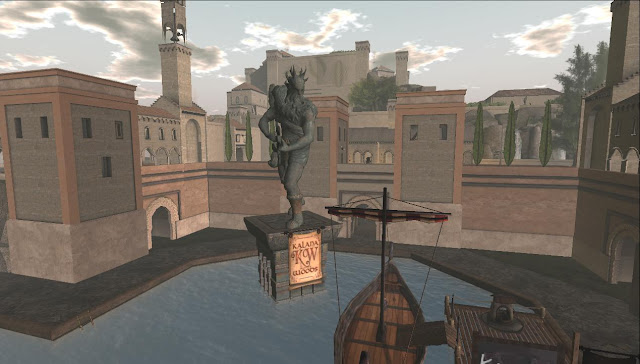 At the highest point of the citadel, is located the central square with an impressive fountain and a statue in the center which is actually one of the most famous statues in the world, the “Winged Victory of Samothrace”, currently located in the Louvre museum. 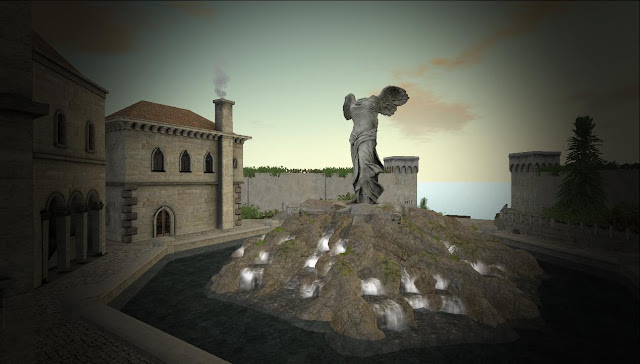 The city although is a bit overbuilt, looks rather impressive. Houses and role-play areas are placed carefully giving a tone of balance in the whole area. There are many narrow spots all over the citadel which will benefit the swordsmen rather than the archers.
As I entered the tunnels, I found a huge room. I wonder… this looks to me like a fighting room. Hmmmmmmm… 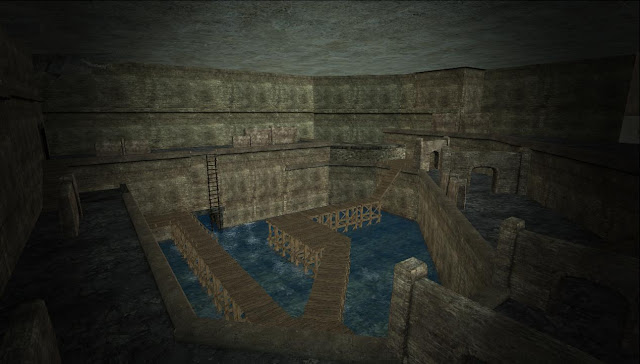 I took as many pictures as I could and I am telling you, the Sphinx is not a great photographer but I really liked the build!
An eerie tunnel…Where does it lead to…? 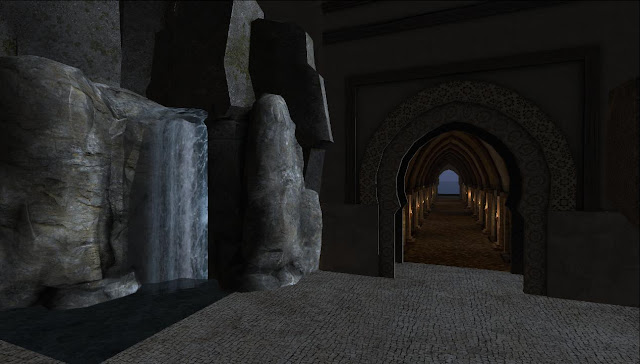 A view of the citadel from the North side. 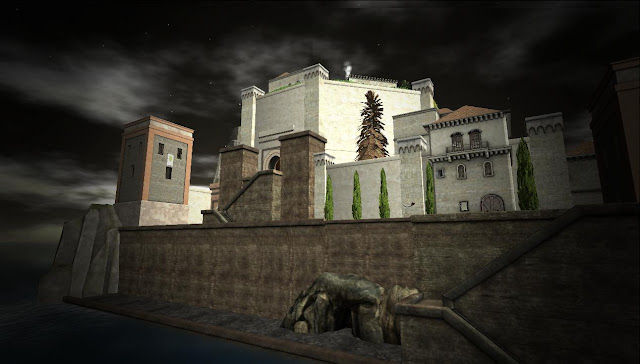 And of course a spa! Slaves are forbidden to enter! 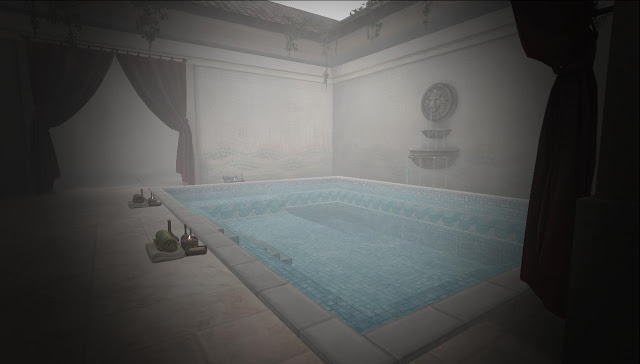 Overall I think it is a good build and I had fun exploring it. Of course I do not know how functional it will be in a case of a big raid. There are already 1500 active scripts while the sim was empty, and the residents have not even rezzed their furniture yet...

But let’s not forget, if someone wants to enjoy the Gorean life with style and role-play in a place where the options are abundant then certainly the luxurious city of Kalana is a perfect choice.

Till next time , Adieu!
The Sphinx
Posted by PewPew Zero at 5:50 PM